0 Item(s)
Your shopping cart is empty!

The duty belt is a staple of every police officer’s equipment and often the final piece of the uniform that he or she will don before reporting to line-up or their assigned duty station. For many, it can be a pain-inducing, circulation-restricting, mobility-inhibiting nightmare. With duty belts typically carrying a service weapon, TASER, handcuffs, a radio, OC spray and duty magazines, it's easy to see how this addition of 20 pounds of equipment presents a strain to the officer's hips and back, as the weight is distributed along the circumference of the duty belt. BlueStone Safety seeks to remedy this with their custom load-bearing vest, which shifts the weight from the hips and back to the shoulders, which are much more well-suited to the task.

“We were able to work with BlueStone Safety to utilize the chosen space as efficiently as possible to make room for all of our required equipment,” said Dohms.

BETTER FOR YOUR BACK

Besides giving officers storage options, one of the real draws of a load-bearing vest is its ability to transfer weight from the hips and back and redistribute that weight to the shoulders. Sure, some opt for suspenders to allocate this weight from the belt in a similar manner that a load-bearing vest would, but, as a patrol officer, I can tell you from experience that once you have a clasp snap or experience the dreaded feeling of having them pull your duty pants too high when you bend a certain way, you’ll likely reconsider.

Couple this with the fact that officers wearing load-bearing vests no longer have cuffs or that pesky flashlight poking them in the ribs, it’s clear that officer comfort is greatly enhanced when wearing a load-bearing vest. In fact, after being test subjects for the University of Wisconsin/Mayo Clinic study, Eau Claire PD decided to have BlueStone Safety be the official supplier of load-bearing vests to the department. 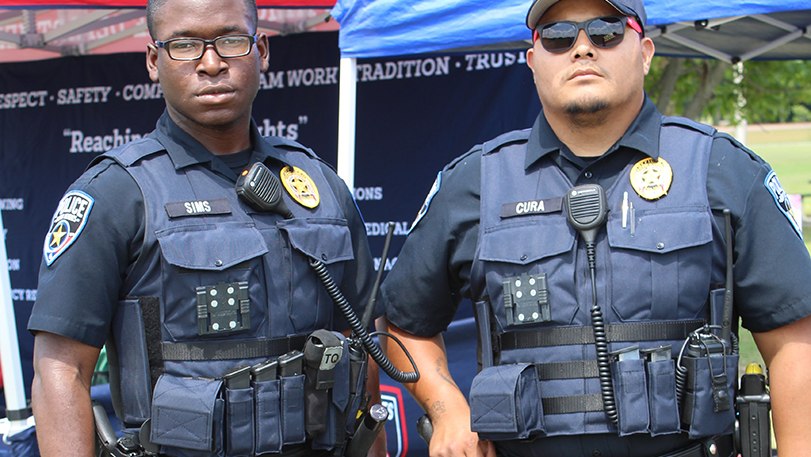 Typically, officers have been limited in their ability to protect themselves from threats greater than what standard soft body armor offers. Modern soft body armor vests work well against handgun rounds but are easily defeated by most rifle-caliber weapons. In most cases, to gain adequate protection from rifle rounds, officers opt for a Level IV armor plate carrier that goes over their current uniform. While this offers adequate protection from rifle threats, the external plate carrier can be cumbersome to don and can impede access to critical gear.

Since BlueStone Safety’s load-bearing vest is customized for each individual officer, it can fit any brand of Level II or IIIA soft armor issued to that officer. By request, the vest can also include a hidden Level IV rifle plate pocket on the front and/or back of the vest that allows officers to easily slide their rifle plates in when needed, giving them a layer of rifle-rated armor protection.

Inserting the Level IV rifle plate right into the load-bearing vest takes less time than it takes to don an external plate carrier and still gives officers access to all the gear in their load-bearing vest while maintaining a nondescript look. 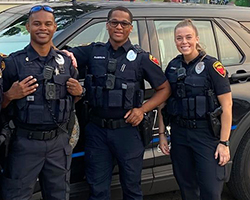 As a police officer in North Texas, I can tell you that our summers can get absolutely brutal. I remember several times during my time as a patrolman that I would be stuck on a call in the sun on a hot July or August day and would make a feeble attempt to pull away the top of my vest from my body, trying to rid myself of the heat. Normal uniforms require that the vest be worn under the uniform shirt, and with many officers wearing shirt stays or tucking systems, it can be a real pain to remove the vest to cool off. It was never really effective, and I usually got a whiff of the sauna-like air that escaped, which was never pleasant!

Blue Stone Safety addresses this with their custom load-bearing vest, which features side panels that can open up to release body heat. The carrier is also easily removable, making it a cinch to take off for a meal break or while at the station.

What's more is that when a proper polo-type shirt is worn under the carrier, the officer is still able to maintain a professional appearance while cooling off. This is a real boon to officers. Heat stroke and heat exhaustion are serious, especially in locales that have brutal summers and the ability to increase officer comfort and safety is yet another key benefit that Blue Stone custom load-bearing vest offers its users.

The practical, back-saving design, plus the ballistic protection and professional appearance of BlueStone Safety’s custom load-bearing vests can satisfy everyone in the department, from the chief concerned about a uniform look and good value to the beat cop looking to avoid feeling beat-down at the end of a shift.

BlueStone Safety offers a two-year warranty for craftsmanship and materials on their products, all made in the USA.

By accepting you will be accessing a service provided by a third-party external to https://bluestonesafety.com/